November 12, 2018
These are the eight quilts in the show at the Parrott Gallery in Belleville, Ontario.The show is a collaboration with my husband, Larry Tayler, photographer.
Artist Statements' are included, as are links to brief YouTube videos for each quilt.Photos by Larry Tayler (larytayler.com) 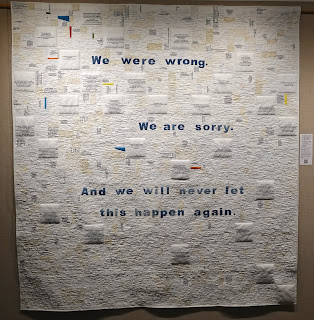 For the Oppression of Lesbian, Gay, Bisexual, Transgender, Queer, and Two-Spirit Communities, We Apologize
Not For Sale
77” x 82”
· Based on a variation of a traditional
double disappearing nine patch block.
· Fabric design assistance by Hri Neil,
Carbon Art and Design (www.carbonartdesign.com)
· Hand guided, free motion quilting by Deanna Gaudaur – (www.quintestudios.com)

On November 28, 2017, in the House of Commons, Prime Minister Justin Trudeau delivered an apology to LGBTQ2 Canadians.

I wept as I listened to his words that day and I wept again as I reread them repeatedly, in the making of this quilt.

I am so proud to be Canadian! 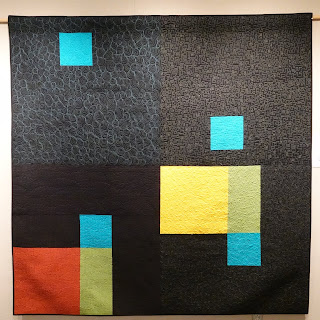 This quilt is one large, double disappearing nine patch block.

It is about the power that we each have as one lone voice …
· to speak our truth,
· to call out inappropriate behaviour,
· to question what we don't think is right,
· to start conversations that might seem difficult.

This quilt inspires me to push the limits on issues that I talk about through my quilts; and hopefully to start more conversations. 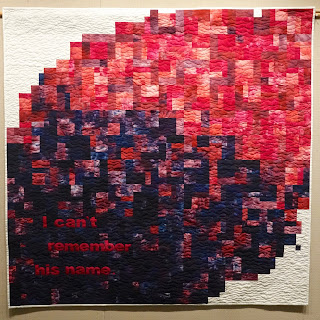 I Can't Remember His Name

I remember that his beard was soft;
That his hands were rough;
That his stomach was hairy.
But I can’t remember his name.

I remember being told to be quiet;
That I’d be in trouble if someone came;
That I wanted this.
But I can’t remember his name.

I remember the smell of his pillow;
His hand on the back of my head;
The weight of his body.
But I can’t remember his name.

I remember that it was over 55 years ago;
That I was 11;
That I’m only remembering now.
Why can’t I remember his name? 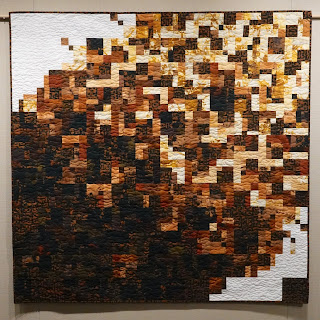 I’ve thought and read a lot about forgiveness lately.

· ‘Good to forgive. Best to forget.’ – Robert Browning
· ‘Let no man pull you low enough to hate him.’ – Martin Luther King
· ‘To be a Christian means to forgive the inexcusable because God has
forgiven the inexcusable within you.’ – C. S. Lewis
· ‘Forgive others, not because they
· deserve forgiveness, but because you deserve peace.’ – Jonathon Lockwood Huie

No one quote can fully sum up what I feel.  But I do know that I need to forgive … to let go. Otherwise, the past will consume me.

I will never forget.  I don’t think that we’re supposed to forget.

I will, however, forgive. 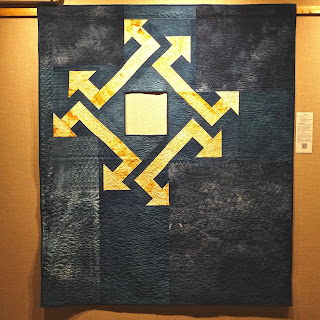 My adult life has been about change.

I have described myself as a husband, a dad, a son, an orphan, straight, gay, a teacher, a school administrator, an urbanite, a shop keeper, a farmer, a shepherd, a spinner, a retiree, a widower, a volunteer, a husband again, and a quilt maker.

For me, change has been like a constantly churning cog in a wheel.

The more that I accept the changes, the faster change churns, until it becomes a whirlwind that envelops me and whirls me through doorways and into the next change.
Embracing these new changes without fear, seems to grow the grandness that is my life . 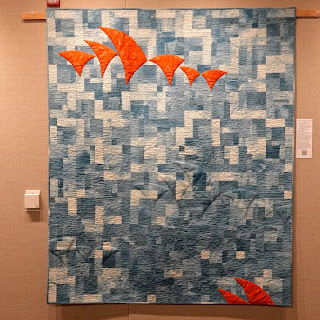 I love the Sydney Opera House.

And I love this iconic view of the sails of the Opera House.

To me, this view captures the grandeur of the structure, as it reflects over and over in the waters of Sydney Harbour, and in the hearts and minds of visitors from all corners of the world.

The ‘water’ is my own hand dyed indigo fabric.  The ‘sails’ are from fabric designed by Australian, Shauna Scicluna.  Jorn Utzon, the designer of the Opera House said that his design was inspired by the ‘simple act of peeling an orange’, so the orange fabric colour seemed perfect. 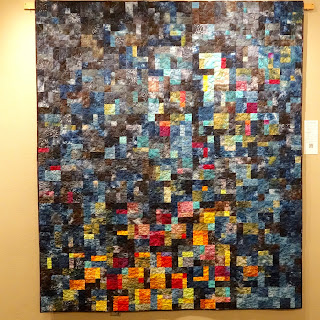 I love the night.

In its darkness there is a calm; a quiet.

But no matter how dark it seems, there is always light … light from the heavens, and light from within us all.

And from that light comes the colour of night.

And we know the peace that comes with the colour of night.. 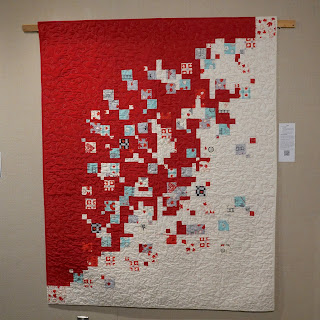 Private Collection
53” x 65”
· Based on a variation of a traditional double disappearing nine patch block
· Quilted by Deanna Gaudaur – (www.quintestudios.com)

Days before his eighth birthday my Grandson told me … “My Dad doesn't think that you act your age Grandpa.”

In an attempt to discover how old I do act we continued to chat.

We discovered that we had similarities.

Our conclusion … we are both eight!