August 01, 2020
I wasn’t going to post this just yet.  I’m waiting for professional photographs that haven’t arrived yet, but I could be silent no longer.
Posts were removed today from at the Quilting In Canada Facebook page because they were ‘too political’. They dealt with racism. So I’m posting this with just a poor quality photo taken by me.
This is a very Canadian quilt that speaks to racism in Canada.
It was finished yesterday. (Quilting by Deanna Gaudaur, Quintestudios.com)
The first QR Code leads you to Desmond Cole’s Blog entry ... ‘Remembering 27 Black, Indigenous, and Racialized People Killed By Canadian Police’.
The second one leads to a Canadian documentary made by Charles Officer and Desmond Cole ... ‘The Skin We’re In’.
These present facts, folks.
Let’s be the change! 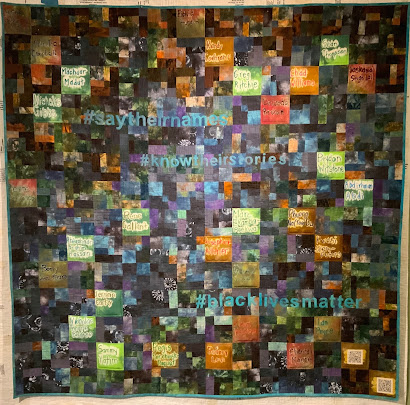 Thirty Dead … and Counting: Systemic Racism In Canada
I will never again accept ‘tsk tsk’ from Canadians responding to racism in the US.
Racism is alive and well in our own country, and we need to talk about it!
When I started this quilt, I knew that I wanted to address systemic racism, as I began my own education as a privileged, gay, white, male. I knew that I needed to learn, and I needed to change.
In order to get a better sense of the Canadian reality,  I purchased the Audible version of Desmond Cole’s book, ‘The Skin We’re In: A Year of Black Resistance and Power’.
As I listened to him reading his book, I wept openly. Somehow, as an apparently well informed Canadian, I had no idea that this is reality in my own country.
This quilt, and my shame, grew as I worked and listened to Mr. Cole’s words.
Written on this quilt, in street graffiti style, are the names of the last thirty Black, Indigenous, and People Of Colour (BIPOC) killed by police, or who died while in police custody in Canada.
When I started the quilt, there were only twenty-seven names.
In the bottom corner is a link to Desmond Cole’s blog where the names are listed, with individual links, so that you can read their stories.
Above that is a link to a CBC documentary by Charles Officer and Desmond Cole, ‘The Skin We’re In’.
Please follow the links.
#saytheirnames #knowtheirstories #blacklivesmatter 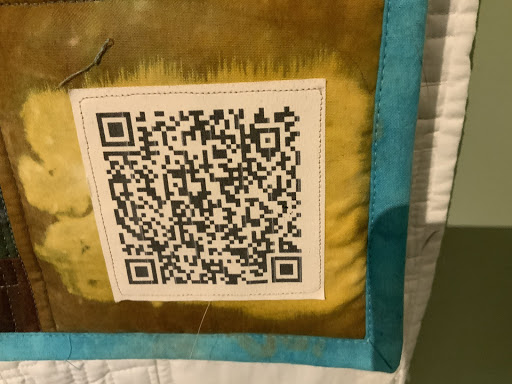 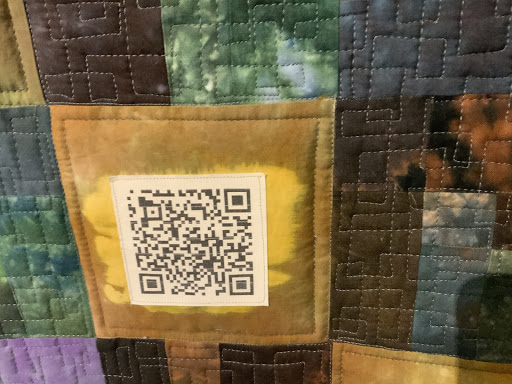