April 20, 2019
One of reasons for staying in one place for five weeks was so that Larry and I could tap into the amazing energy of the area!

We travelled lots AND I still managed to get five quilt tops pretty much done in five weeks.
Larry, I'm sure averaged over 1000 photographs a week.
It was a wonderful stay!

The first quilt was a test of my own 'For Baby and Me' quilt pattern.  The pattern is dead-on and ready to be published!
It is a gift for Oliver.  Oliver is the son of the kid who used to work for me when I had my farm.  Hard for me to fathom how Matt grew old enough to have his second kid ... while I have stayed exactly as I was ... LOL 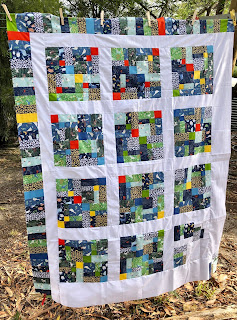 \
The next one was a test of another one of my patterns "It's a Slippery Slope'.

I changed the colourway from the original white background and used a Canadian themed fabric line.

As I worked with Canadian themed fabric, while basking in all that is wonderful about Tasmania this quilt took on new meaning to me.  It tells the story of just how easy it would be to slip into life in Tasmania.

There was a major flaw in the pattern, which I have fixed.

It is with my quilter, Deanna Gaudaur, waiting to be quilted. 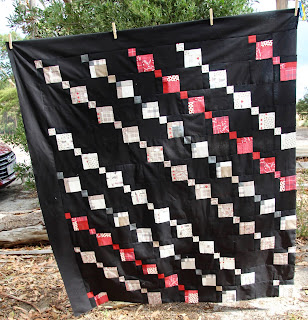 After TWO quilts where I followed a pattern, I needed to do something freer and more creative!

My friend Jan Ochi, who owns Wafu Works in Kingston Beach, Tasmania had lent me her sewing machine, and when I went to pick it up, I fell in love with these linen-like, textured Japanese prints in taupe, indigo and off white ... so I bought a bunch.

During our travels, I was amazed by the tile patterns that seemed to be everywhere and I kept taking pictures of them to use in my quilt making.

The one below is a photo taken in a men's room, that I THOUGHT was empty but wasn't ... but that is another story.

I decided that it would be a fabulous start to an improv quilt based on 2", 4", and 6" squares and rectangles.

The quilt just grew on my design wall and the entire process was just so much fun! 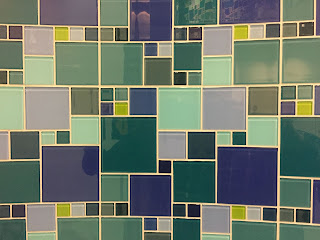 Here is the finished quilt top.  I love the random bits of colour ... the misfit bits.

The quilt is called 'Life's Better Because of Us: Reflections From a Misfit'.

And it is!
Imagine a world without the odd, the different, the unusual, the misfits ... 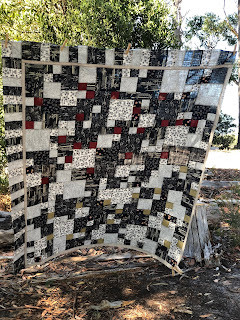 I was so excited about the freedom of improv work in quilt making that I dug our my Victoria Findlay Wolfe fabric that I'd brought with me.  It's hard to find her fabric outside of the USA, but my friends at Picton Fabric World have her entire 'Neutrals' line. 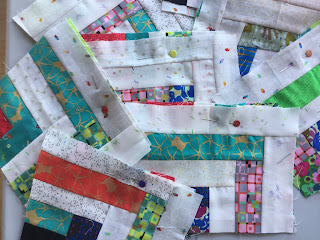 I decided that I wanted to base the quilt on a wonky log cabin block with lots of 'negative space' background.  I kept cutting up the log cabins and mixing them up ... and adding more and more of the wonderful Neutrals line.

I wanted to tell the story of going home, and the ways the meaning of 'going home' changes in our life's

Here it is early on, growing on my makeshift design wall in Tasmania.   It is finished now ... and absolutely fabulous, but I'll save that for another post. 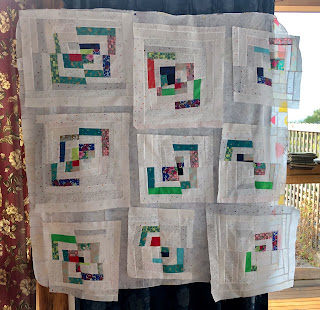 The final quilt that I worked on is another 'Surviving January' quilt.  I will be teaching this quilt at Keystone Quilts in Winnipeg, Manitoba in September ... so there needs to be a pattern!!

I'm doing this one with four charm packs of Kaffe Fassett fabrics in four colourways.  I still have some bugs to work out with the pattern and the class, so there is one more to make.  I'll do that one using four colourways of Kona Solids.

I'm sewing the last of this one together and will have it off to Deanna soon! 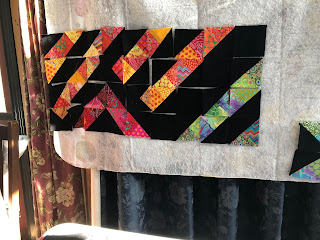 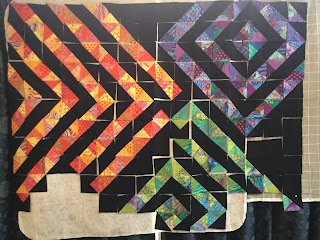